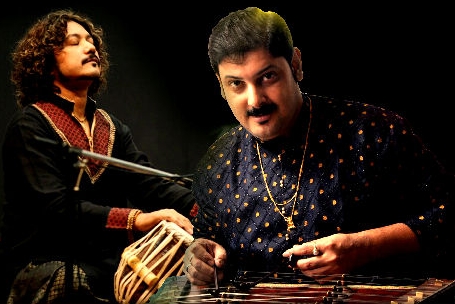 presented by the Kabir Cultural Centre

Needless to say the concert was a great success.

Sandip Chatterjee is a brilliant innovative Santoor player who is always developing new techniques to play Santoor as well as taking the performance from classical to jazz to contemporary music. He has had significant international collaborations with famous musicians such as Jazz guitarist Guy Strazz, saxophonist Claudio Giglio, Afro-Cuban percussionist Fulvio Farkas, Swedish saxophonist Elin Larsson, Italian guitarist Giuliano Modarelli and many others. Sandip is from India and is the disciple of two great virtuosos, Pandit Tarun Bhattacharya and Pandit Ajay Chakraborty, the torch-bearers of two gharanas, the Maihar and the Patiala. He started learning Santoor at the tender age of eight. Having won many awards, he leads the torch with his brilliant fusion wave of introducing santoor in various walks of music. Amongst his other innovations, Sandip Chatterjee has also given the electric avatar to Santoor, i.e. electric santoor.

The flamboyant and sensational tabla artist Subhajyoti Guha, is extremely talented young tabla player from Kolkata, India who has a large following in Toronto, Canada as well. He has been presented at Kabir Centre several times before and has always thrilled the audience. Introduced by his father, Dr. Smriti Ranjan Guha, he started playing tabla at the early age of five. Subhajyoti fuses the styles of two gharanas together, Farukkabad and Punjab Gharana. He has won numerous awards and now is a ‘grade A’ tabla player at All India Radio and TV. Humble at heart, he aims to win the hearts of his audience.