Feustel is married to Indira, a speech language pathologist whose father Dr. Vijay Bhatnagar was born in India and attended the University of Punjab. The family still has many relatives in New Delhi. 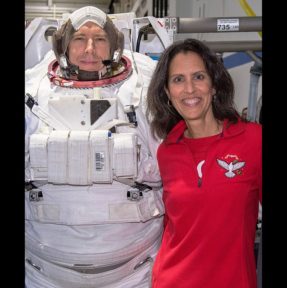 The astronaut will launch for the six-month expedition will blast off from Baikonur, Kazakhstan March 21. This will be Feustel’s first long-distance mission serving as flight engineer on Expedition 55, and later as commander of Expedition 56. Epps will become the first African-American space station crew member when she launches on her first space in May 2018. She will join Feustel as a flight engineer and remain on board for Expedition 57.

“Each space station crew member brings something different to the table and Drew (Andrew) and Jeannette both has a lot to offer,” said Chris Cassidy, chief of the astronaut office at NASA’s Johnson Space Center in Houston. “The space center will benefit from having them on board.”

A native of Lake Onon, Michigan, Feustel was selected as part of the 2000 astronaut class and in 2009, flew on the space shuttle Atlantis for the final servicing mission of NASA’s Hubble Space Telescope. He made his first trip to the space station in 2011.

Feustel attended a number of universities in the United States and also studied specialization in seismology from Queen’s University in Kingston, Ontario. He met Indira in Kingston.

Feustel and Epps will join will join a long and distinguished line of astronauts who have crewed the International Space Station since November 2000. So far more than 200 astronauts have visited the space station. Epps is from Syracuse, New York.

She spent seven years as a Central Intelligence Agency (CIA) as a technical intelligence officer before being selected as a member of the 2009 astronaut class.