It’s time that rest and rotation policy is put behind us: England Test skipper Root 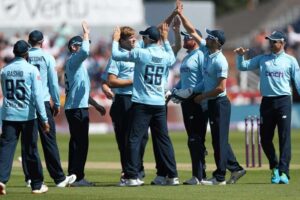 It’s time that rest and rotation policy is put behind us: England Test skipper Root

London,  England – Test skipper Joe Root says it’s time that they set aside the much-debated rotation policy to field the strongest possible teams against India and later in the Ashes so that they can compete for the WTC title instead of watching the marquee contest on TV.

England and Wales Cricket Board’s (ECB) rotation policy became a hot topic in world cricket when they did not travel to India with their full strength squad earlier this year and lost the series 1-2 to got out of the WTC final race.The new cycle of the World Test Championship (WTC) will begin with the five Test series between India and England from August 4 in Nottingham.”We are coming into a period of time now where rest and rotation is put behind us,” Root was quoted as saying by ‘ESPNcricinfo’.”Hopefully, if everyone is fit, we are going to have our best team available for what is to follow. That’s really exciting and something I’m very much looking forward to.”

onny Bairstow and Mark Wood did not compete in the first two Tests against India but took field in the fourth test. Their first-choice keeper Jos Buttler also returned home after the series-opener.Root is hoping it won’t be same story this time.”We have ten very hard Test matches against two brilliant opposition coming up but it is a great opportunity for us to play some strong cricket and if everyone is fit and available we will have a good team ourselves.”

Root contended that the tough series against India will be ideal preparation for the Ashes and therefore they need to have the best players available.”I’d like to think that, over the next five Test matches, we’ll be trying to play our strongest side or have our strongest squad available for those games. This is, I suppose, what you do it for: to ready yourself for this lead-in and for in particular that Ashes. To make sure everyone’s peaking for that, and these big games.

“Watching the WTC final and not being part of it, it makes you want to be a part of something quite special like that. We have an opportunity now to go a bit further and better than we did the first time out. I’m looking forward to hopefully starting well with a full squad of players to pick from.”