Montreal, April 18, 2015 – A lawyer by profession, Ms. Mélanie Joly, was MP Justin Trudeau’s senior advisor. She specialized in constitutional law in different countries and Human rights at the University of Oxford. After practicing law for five years, she decided to go into communications. She ran the Cohn & Wolfe for the Molson family amongst other clients such as the Bronfman family. Much involved in the Montreal community and its political think tanks for the youth, she also served on the Board of CHUM Foundation.

Monika – What intrigued your interest in politics?

Mélanie Joly – Even as young as six years old, I believed that as a politician I could better the world. My dad was involved in the Liberal Party of Canada. My great great uncle was a liberal MP in 1930s as well as my two great grandfathers were mayors of small cities. There is political blood in the family.
I was very involved in the school events and speeches. During my training as a lawyer, litigation was also a good preparation.
Then I met Nahid Hussain. 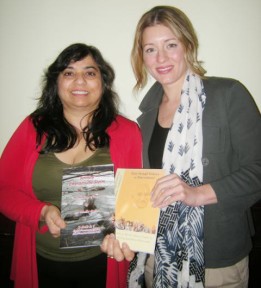 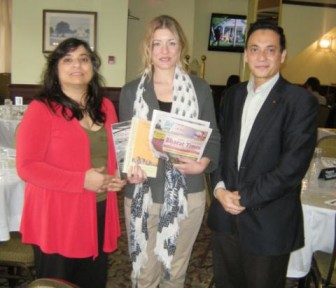 Monika – What are your views on the cultural communities in the political arena?

Mélanie Joly – I was raised going to school with 2nd generation immigrants. Most people 35 years or less have the same community history of living here, which is, you are part of the cultural communities. Afterwards, the friendships continued. I have and had Indian friends, Italian friends and friends of other origins.

When I ran for the Mayor of Montreal, I was looking to recruit candidates. And the candidates from Indian communities crated an entire team, eight of which were elected.

Monika – How did you like working with MP Trudeau?
Mélanie Joly – It was nice working with him. I know Trudeau for a long time. His political engagement is profoundly rooted in the family. He is very progressive, open minded and likes to work in a team.

Monika – Once elected, what new you would like to bring on the platform?

Mélanie Joly – I would like to see more funding for the Public Transport. The Ahuntsic region has a plan for a new metro from Cote-Vertu to Bordeaux-Cartierville.

Quebec has been opting between grass roots level closest to citizens and the province. I prefer that the new Federal funding should be sent directly to the cities.

Monika – So, you are in favour of more decentralization?

Mélanie Joly – Yes. When Canadian constitution was written only 20% of the population was urban and 80% was rural whereas now it’s the opposite. In today’s politics, we talk more about cities and less about the country. We are closer to the cities to empower them.

First and foremost, I would like to advocate the ‘special status’ for Montreal to be set apart with more powers from Provincial and Federal. Once elected, I will not be advocating it but actually doing it as the Federal Minister.

Chabanel is an example of what I can do to send money directly to the city platform for new businesses to flourish. Most big buildings in Chabanel are owned by the Federal entities and their PSPs – Pension Fund of the Federal Public Servants.

Monika – Tell us more about your projects for the area.

Mélanie Joly – This time the riding area is divided into Ahuntsic, Cartierville and Chabanel. Each area has specific projects.

Chabanel is already rolling with big jobs by setting up start-up businesses.

Cartierville has the metro project.

In Ahuntsic area, I want to make sure the part next to the river becomes a national historical site because that is where Jacques Cartier stopped when he first came to Montreal. This heritage must be protected. These are just the highlights.

As a young woman, I want to better perceptions of immigrants and bridge gaps between Francophones and cultural communities, esp. young, senior and women.

I am also working hard for the much-needed social housing project in Ahuntsic-Cartierville since the Liberals are very clear in investing in social housing.

Monika – What message would you like to convey to the community, Mélanie?

Mélanie Joly – Go vote for the right person who is going to take care of you and for your interests.
My pragmatic approach is to try to decentralize the authority and funding, thus making it possible to directly hire immigrants with skills. We will definitely need to work more on the foreign credential recognition.

Mélanie Joly is the author of ‘Changer les regles du jeu’ i.e. ‘Change the rules of the game’, which talks about the changes in Politics in contemporary times. (October 2014). The book was received very well.