Peace Through Violence or Non-violence?

Peace through Violence or Non-Violence? 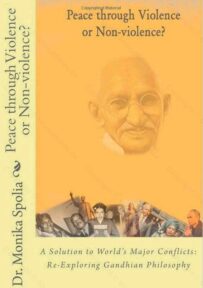 Peace Through Violence or Non-violence?

ISBN-13: 978-1481926720
This book is a step by step guideline of preparation on the journey of peace. Explanations follow in a simple logical manner.
Explanations in this book are profoundly logical and quite unlike the common literature, which is claimed to be ‘about peace’ or ‘on peace’ but, in fact, is about the absence of peace or wanting to have peace. For us to have peace (peace as an end), we must be in peace (peace as means) because such the means, so the end
Many great minds from around the globe have pondered over, theorized, entertained, explained, explored and demonstrated ‘Peace’ as a universal theme. However, Gandhiji was the first and only to actually exemplify by living his philosophy of peace that justified both peace as means and peace as an end – called non-violence philosophy; which was taken up by many even after the time of Gandhiji.
Dr. Monika Spolia has done an excellent job in weaving together the historical patterns overtime of socio-political upheavals, unrest and the rise of unspoken bubbles of non-violence philosophy scattered around the globe ready to be burst.
This book comprises of a study of various literatures – Gandhiji, Bayard Rustin, Rosa Parks and Oka blockades critiqued in the light of Non-Violence philosophy as praxis and culture. Bayard Rustin and Rosa Parks in the United States also shared Gandhian vision of non-violence. The Oka blockades in Canada witnessed an attempt of satyagraha by the First Nations people.
Further, this book demonstrates that peace can be attained in real life only through dynamism of Non-Violence philosophy which takes place when we live Non-Violence as praxis and that the journey of peace must be non-violent to be peaceful.
The scope of this book encompasses micro level as well as macro level. In its holistic approach, non-violence philosophy starts at micro-level with the individual, and is gradually applicable at all macro-levels through satyagraha, sarvodaya (sustainable economic model) and Gandhian anarchy balancing itself into political stability.
Dr. Spolia has successfully succeeded in presenting an objective view of peaceful ends through peaceful means in this book.

About the Authour: Born in India, Monika Spolia grew up in Canada. She finished her BSc. in Physics and Mathematics at the University of British Columbia, Canada. Always fascinated by cultures and grass-root movements, she traveled to India to pursue her Masters in Anthropology at the University of Rajasthan in Jaipur. During this time, she also conducted independent research on Adivasi (indigenous people) in India and worked on a resettlement action plan for villages in Rajasthan. Her works were published in the articles in ‘Fairs and Festivals of Indian Tribes’ and in ‘Tribal Dances of India’.
She has often been on the forefront for expressing her ideas and theories. She completed her Doctorate in Anthropology and Political Science. As a social activist, she organizes and partakes a lot of Indo-Canadian events bringing together a harmonious hodgepodge of cultural communities, a Canadian society, Unity in Diversity.
With years of experience in writing, research and journalism, she is the Chief Editor and founder publisher of Bharat Times Newspaper in Montreal, Canada. Since its inception in 2003, Bharat Times has been acclaimed because of its innovation and popularity, and its catchy style has often been imitated.
In recognition of her achievements, she received the Outstanding Business Person Award 2005, from NACOI, National Association of Canadians of Origins in India, at 25th Banquet Award Ceremony in Montreal, Canada.
In 2006, she was the ‘Hind-Ratan’ Award nominee (Indian Jewel Award) from NRI (Non-Resident Indian) Welfare Society of India for the year 2006 in regards to the achievements in mass-media communication and implementation of a full fledged intercultural newspaper in Canada.
In December 2012 she received a ‘Writers Lifeline International Editor of the Year’ award for her dedication to the cause of ethnic journalism and for promoting understanding through cultural activities and as the managing editor of Bharat Times.
She has always held her parents dear to her heart. In a way, this book is the result of Gandhian non-violence philosophy, which shaped her upbringing, thanks to her parents.