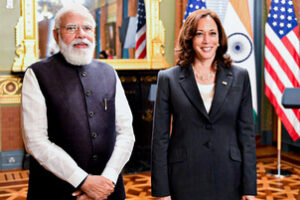 PM Modi meets US Vice President Kamala Harris
bharat pandey,Washington
Prime Minister Narendra Modi has described India and America as “natural partners” as he held the first in-person meeting with Vice President Kamala Harris at the White House during which they decided to further cement the Indo-US strategic partnership and discussed global issues of common interest, including threats to democracy, Afghanistan and the Indo-Pacific.
“India and America are natural partners. We have similar values, similar geopolitical interests,” Modi said in a joint media appearance with Harris on Thursday, the first-ever person of Indian origin to be elected as the vice-president of the United States.
Noting that India and the US are the largest and oldest democracies, Modi said the two countries share values and their coordination and cooperation is also gradually increasing.Both the leaders appreciated that the bilateral relationship is on a sound footing, Foreign Secretary Harsh Vardhan Shringla told reporters here while giving details of the meeting that lasted for an hour.
This is the first meeting between the two leaders. Harris had earlier spoken with Modi over the phone in June during the COVID-19 crisis in India.