Hosted by the United Irish Society, The St. Patrick’s Day Parade is one of the best parades in Canada. Pictured along with my mother is our lovely Community Queen for The Little Angels Society, I Dream Foundation, Aine Anne McEntee, a professional award winning Irish Dancer, LAS Queen, and our spokesperson, for the environment, and animals.

Kevin Gillan is a Musician, Accordionist and a video artist who is fluent in Gaelic, the language my Grandmother, Mary Godson (nee Calvert). She was also a fluent speaker of Gaelic. In this very pretty language, my Grandmother recited poetry.

Kevin was born and raised in Ireland. In the coach (on front page photo) is Kevin’s 85 year old mother who is seen sitting attired as the Wizard Mother,along with my 95 year old costumed mother in the horse drawn coach. Aine Anne’s parents met and married in Ireland before coming to Canada. Aine Anne and her brother are born in Canada. 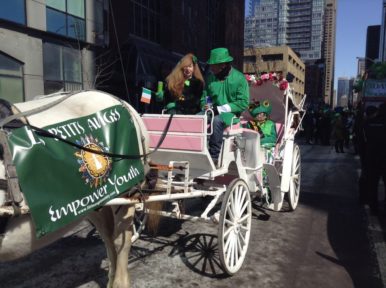 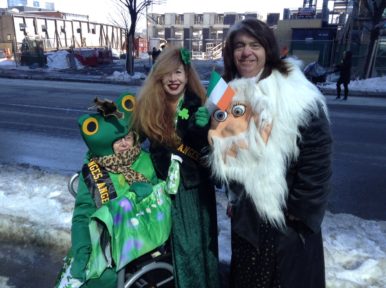 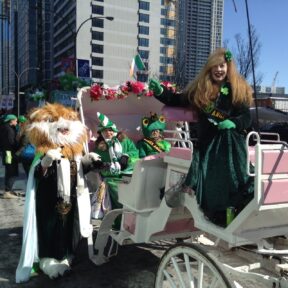 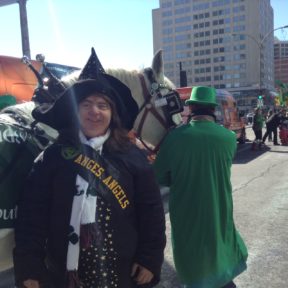 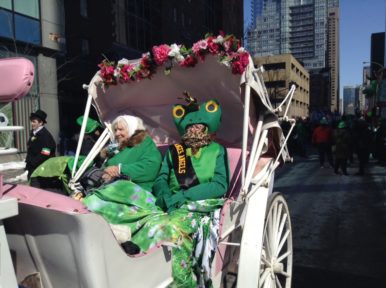 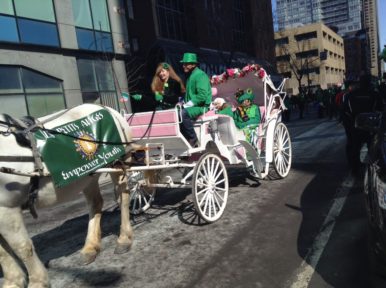 During the parade, I wondered about the word Daw. Then it dawned on it is for our Dawson College. The tall buildings are very typical of Montreal, downtown site along St. Catherine area.

The Caleche is rented from Lucky Lukes Stables, located in Griffin town, one of the oldest districts outside of Montreal.The original Irish settlers founded the area. It was once also known for its Irish mafia.
The coach is pink, for cancer. Green…for Ireland. Slainte (Good Health in Irish Gaelic.

Speaking for myself, I really really missed the Dancing Wiz, and our Gracie Wilson, usually the adorable green amiable smiling frog prince. Also the glowing personality of Monika Spolia, who is usually attired as a pretty princess Snow White, was missed. She could not join us this year. Gosh guys, I hope to see you next year.

Monika get your car fixed. Gracie, keep getting stronger.

Much love to all.