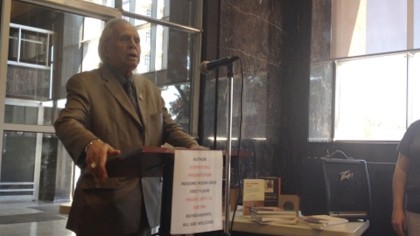 Stephen Gill presented some of his books to Cornwall Public Library on September 11, 2015.
The presentation of the books included three books by himself, a selection of critical studies on
his books by professors of English Literature, and translations of some of his books in Romanian
language. The books he authored before 2009 were presented on March 4 of that year to the
same local public library. CEO Dawn Kiddle said on that day that the library had to do
something to honour Stephen Gill.
September 11, 2015 was a gorgeous day also because the sun was at the pinnacle of its beauty
when citizens are anxious to bathe in its warmth. The audience was from the different segments
of society—from different professions. But there was one factor that was common—there was
one factor that bonded them and that factor was their love for libraries— that factor was their
love for ideas which rule the world. Stephen Gill added that without ideas– without books—
without libraries, even the beauty—even the grace of the sun was meaningless.
Stephen Gill thanked Cornwall Public Library for providing the cultural needs of the historical
city of Cornwall and its surrounding areas. He said, “I undedrstand, a library is a place where
citizens find all sorts of ideas. I understand that these are the ideas of thinkers- these are the ideas
of philosophers– that have been ruling the world in one way or the other. It is not easy to find
these ideas and their unimaginable power without their custodians like Dawn Kiddle and Sonja
Irving. He thanked them for making it possible for him to present copies of some of his books to
these custodians of culture that afternoon.
The evening was kicked off with Canadian National Anthem by Sarita VanDyke, a professional
singer, and audience participation with a brief talk by Dr. Monika Spolia, a prominent poet and
chief editor of Bharat Times, published from Montreal. 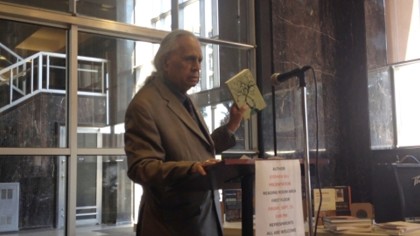 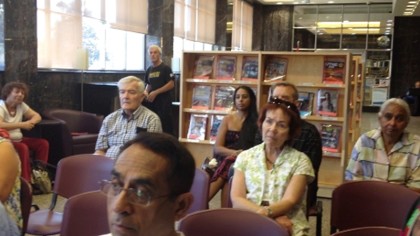 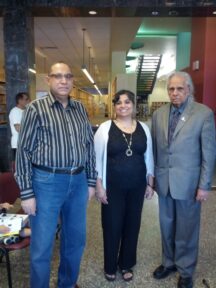 Stephen Gill with Monika Spolia and Abid at the Cornwall Library 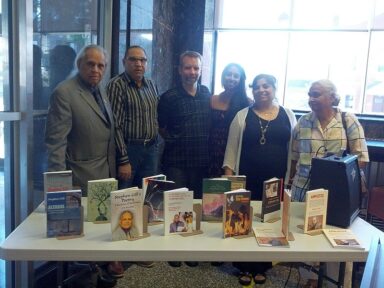 Librarian and head of the Adult section, Sonja Irving, thanked the author, hoping that readers
will find it easy to obtain books of Stephen Gill locally and out of the town readers through
library loan system.

Receptive audience participated by talking about the books of the author, particularly his modern
epics, The Flame and Amputee, and asking questions about peace. The presentation was closed
with nourishing and delicious refreshment provided with the courteously of Shawarma
Restaurant of Cornwall.

Multiple award-winning Stephen Gill who has authored more than twenty books, including
novels, literary criticism, and collections of poems, is the subject of doctoral dissertations, and
research papers. Ten full critical studies have been released by established publishers and more
are to be released on his works. (Websites:
www.stephengill.ca; www.stephengillcriticism.info). Monika Spolia reciting poetry in Hindi at a mushaira in Cornwall