Home » Astrologers » Through the Lenses of Science, on the Wings of Spirituality (Chakra Samhita) – 6 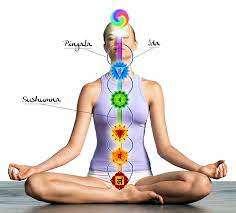 Through the Lenses of Science, on the Wings of Spirituality (Chakra Samhita) – 6

This Nadi, situated on the left of the body, conversely impacts the right side of the brain, transmits feminine energy and imparts a cooling experience. Ida Nadi is known as Chandra (Moon) Nadi also, as it is connected to lunar energy. The tendency to dwell too much on the past happenings contaminates Ida Nadi. Hence, one should put conscious efforts through various techniques, including meditation, to get rid of such habit.

Pingala Nadi, located on the right side of the body, on the other hand linked to the left side of the brain, carries masculine energy. Its alternative name is ‘Surya(Sun) Nadi as it relates to solar energy. The tendency to over think the future taints this Nadi. Therefore, one should attempt to avoid unwarranted thoughts of the future over which one has no control.

This is the central channel connecting the Root Chakra(the bottom chakra) to the Crown Chakra(the uppermost chakra). The other two Nadis are on the left and right of this Nadi.
When one can mentally dwell in the present moment, the energy flows through Sushumna. This is the balanced situation and therefore, we often express someone as being ‘centered’ or ‘balanced’. This indicates that the referred person mostly lives in the present moment, causing the energy to flow through the Central channel.

While there are three primary Nadis, the entire human race (barring some rare exceptions) can be classified into two parts – EdaPradhan(Lunar-prone) or PingalaPradhan(Solar-prone). Let’s look at the traits of both of these classes.

People under the influence of Ida Nadi have inclination to be more creative, artistic, emotional and intuitive. Furthermore, they catch colds frequently, have less efficient digestive system, their left nostril clogs often, and are more susceptible to bouts of gloominess and even depression. The likelihood of such people succumbing to various ailments is high because of thoughts excessively hovering in the past, as it is typical human nature to recall unpleasant memories rather than pleasant ones when reminiscing.

Pingla-prone people tend to be logical, analytical, a little fierce at times, and somewhat egotistical. They have a high body temperature, dry skin, a good appetite, a tendency to get infuriated quickly, are vivacious, and their right nostril recurrently gets blocked. These individuals can be tenacious, making it challenging to alter their inflexible viewpoints.

When a person’s energy flows through Sushumna Nadi (Central channel), there is inner balance and tranquility with minimal inner distraction by external happenings, whether pleasant or unpleasant. Incorporating a meditation practice into the routine lifestyle will help immensely in staying grounded, balanced, and in building up the ability to observe life’s circumstances with neutrality. This practice has become more crucial than ever earlier, as the entire humanity needs to change the lifestyle under the lurking threat of Corona and similar pandemics.

With this, we are concluding explanation of nadis and would turn attention to chakras.

spitituality 2022-09-25
Jitendra Patwari
Previous: A Real Change for A Better Tomomrrow
Next: Through the Lenses of Science, on the Wings of Spirituality (Chakra Samhita) – 7