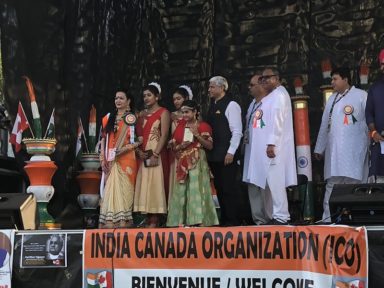 Montreal, August 19, 2018 – India’s 72nd Independence Day was celebrated with much fervor in Parc-Extension area of Montreal. Parade all the way on Querbes from Ogilvy to Liege ended at Howard Park where a lot of cultural festivities took place. The event was organized by ICO, India Canada Organization of Montreal.

Special guests of the evening amongst many were His Excellency the High Commissioner of India in Ottawa Mr. Vikas Swarup; Mr. Frank Baylis, Liberal Caucus, MP for the riding of Pierrefonds—Dollard; Mr. Francis Scarpaleggia, Liberal Caucus, MP for the riding of Lac-Saint-Louis, Quebec; Mr. Alan DeSousa, the Mayor of Saint–Laurent and City Councillor for Ville de Montréal; Mme. Mary Deros, Member of the Montreal Executive Committee responsible for cultural communities and City Councillor for Parc-Extension; Representative for Mr. Jagmeet Singh of NDP.

The cultural program was opened by Arjita with a Rajsthani folk song. This followed by a colourful performances of Bollywood dances and singing. A lot of food and other stalls were there. Kid’s amusement was also taken care of. A great celebration.

Olympic hopes on the line in Ottawa qualifying events