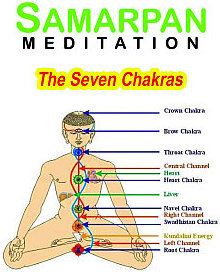 St. John’s, NL, Canada; 9 June 2017 – Under the motto “Peace in One´s World”, the German not-for-profit “Samarpan Meditation Deutschland Stiftung” Foundation is undertaking a world record attempt in the world’s largest online meditation on the third International Yoga Day of the United Nations on 21 June 2017 at 11:30 am (EDT). The meditation is led by the founder of the foundation, meditation master H.H. Shree Shivkrupanand Swami from India. The broadcast takes place via live stream on the Internet via the website www.journey2innerpeace.com where there is further information on the login and on which, one can also be registered in advance. The event is welcome by the yoga minister of the Republic of India.

“If we want peace in our world, first we have to be peaceful from within. When we work to become peaceful from within and with us many, many people, then the peace within all of us will permeate around in our world.” says Dr. Veeresh Gadag, a trustee of ‘Shree Shivkrupanand Swami Foundation Canada / La Foundation Shree Shivkrupanand Swami Canada’ – the Canadian Chapter and a registered not-for-profit Organization in Canada. Dr Veeresh Gadag together with Dr. Shirish Nathwani and Dr. Kate McKenzie the other two Trustees in Canada would like to warmly invite everyone to participate in this global peace campaign.

With the worldwide online meditation, the foundation would like to draw attention to the precious knowledge of meditation. Meditation is part of many different faiths and religions. Which method is practiced is not important here – the wish of the foundation is that as many people as possible learn about the positive effect of meditation. In addition, this project is also intended to draw attention to the project ‘Ort der Meditation bei Frankfurt’ (Place of Meditation near Frankfurt), which is to serve as a free retreat of meditation and peace to all interested people. The World Yoga Day was chosen as the date, as meditation is an important part of yoga.

The Shree Shivkrupanand Swami Foundation in Canada organizes meditation sessions in groups, in retreats and in meditation centers throughout Canada (eg in St. John’s, NL; Montreal, QC; Greater Toronto, Waterloo and Hamilton, ON; Calgary and Edmonton, AB; and Vancouver and Surry, BC). In India itself, about 3.5 million people practice Samarpan meditation. In addition, there are Samarpan meditation centers in USA, Peru, Brazil, the UK, South Africa and other African countries as well as Singapore, Malaysia, Sri Lanka, Nepal, Australia and New Zealand. Samarpan Meditation is open to people of all religions and is offered free of charge.

The current world record in the Guinness World Records in the “Largest Online Meditation Lesson” category is held by the Deepak Chopra Foundation and the Chopra Wellbeing Center, respectively, from the USA, with their world record on 8 August 2014 with 33.061 participants (Source: http://www.guinnessworldrecords.com/world-records/largest-online-meditation-lesson).The current world record attempt is not seen as a competition but as an event to promote the good cause of global meditation as a whole.