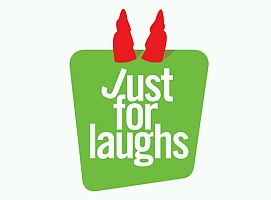 Just For Laughs reveals its first slate of top performers
for the renowned comedy festival’s 36thedition.

The world-famous comedy festival sets up the summer of 2018 with big laughs from the comedy elite as Just For Laughs announces the first slate of comedians, which includes Kevin Hart, Trevor Noah, Tiffany Haddish, Jo Koy, Jimmy Carr and adds talent to both The Ethnic Show and The Nasty Show

April 18, 2018, Montréal – Just For Laughs is excited to announce the first set of performers for its 2018 edition.

Just For Laughs has been synonymous with presenting the who’s who of comedy at their prestigious Galas, taking place over five evenings at the prominent Salle Wilfrid-Pelletier at Place des Arts. This year is no exception. The first two Gala hosts won’t disappoint.

Emmy and Peabody-Award-winning host of The Daily Show, comedian/host/author Trevor Noah will be returning to Montreal, once more to host two Just For Laughs Galas. One of the funniest men in the late-night talk-show sphere, Noah regularly tours, bringing his unique brand of up close and personal standup to audiences everywhere. Join Trevor Noah as he hosts two different multi-comic Galas this summer, taking place on Saturday, July 28 at 6:00 pm and 8:30 pm at Salle Wilfrid-Pelletier at Place des Arts.

Arguably one of the hottest comedians today, breakout sensation Tiffany Haddish has quickly become one of the most sought-after comedic actresses and performers in the industry, but she is finding time to host her first ever Just For Laughs Gala this July! Haddish’s life growing up in L.A. has inspired her style of comedy both on and off stage. She will share her hilarious experiences when she makes her Just For Laughs hosting debut this summer at The Tiffany Haddish Gala. The show will feature a lineup of hilarious comedians and special guests for one show only, Saturday, July 28 at 11:00 pm at Salle Wilfrid-Pelletier at Place des Arts.

Additional Galas will be announced in the coming weeks.

A SOLO SHOW LINE UP WORTH LINING UP FOR

Jo Koy’s Break The Mold Tour will be coming to Just For Laughs this summer in Montreal. In 2017, Koy broke a record for the most tickets sold by a comedian at Blaisdell Concert Hall in Honolulu with 11 sold-out shows and over 23,000 tickets sold. The 2018 tour will have close to 200 shows and will be coming to venues all over the U.S., Canada, Europe, Australia and Asia. With all new material, Koy brings his personal life to the stage sharing what it’s like raising a teenage son to growing up with a Filipino mother. One of today’s premiere stand-up comedians, don’t miss the opportunity to experience Jo’s infectious and explosive energy on stage.

Jimmy Carr: The Best Of, Ultimate, Gold, Greatest Hits World Tour will come to Montreal for nine shows, straight off his critically-acclaimed North American tour. He’s gathering a selection of his very best material along with brand new bits for the ultimate comedy show.

A man who has devoted his life to crafting perfect jokes and one-liners and has left a trail of laughter in his wake, Jimmy Carr’s new tour will distil everything we love to laugh at and be shocked by, into one incredible, unparalleled night of entertainment. This will be his 13th time performing at the Montreal festival.

Previously announced, comedy idol Kevin Hart returns to Montreal, this time to take over the Bell Centre for one special evening of side-splitting laughter. “The Kevin Hart Irresponsible Tour” performance on Friday, July 27 at 8:00 pm, at the Bell Centre.

Additional solo shows will be announced in the coming weeks.

FOR THE DIVERSE COMEDY LOVERS AND THE NOT SO FAINT OF HEART, JFL BRINGS BIG LAUGHS WITH ITS CLUB SERIES

THE ETHNIC SHOW and THE NASTY SHOW

JFL’s tradition continues with The Ethnic Show, returning for its 10th Edition. Offering big laughs from fresh perspectives, this show celebrates some of the most diverse comedians in the industry by bringing some of the world’s most brilliant comedians from different cultures and backgrounds to center stage. As previously announced, this year’s master of ceremonies Maz Jobrani, and comedian Gina Brillon, will now be joined by comedians Francisco Ramos and Matteo Lane, with special guest, Orny Adams. All 16 performances at Club Soda, from Wednesday, July 11 through to Sunday, July 22 are currently on sale, with three shows added Tuesday, July 24 – Thursday, July 26 at 7:00 pm, at MTELUS.

One of the most talked about series at the fest, The Nasty Show returns with a masterful line- up of outspoken, candid and daring standup comics guaranteed to push the boundaries of what is taboo to joke about. Hosted by Robert Kelly, whose honest, abrasively funny, yet refreshingly vulnerable take on life has been winning over audiences for years. Joining Kelly, the lineup includes Brad Williams, Nikki Glaser, Mike Britt, Ms. Pat and Derek Seguin. This uncensored night of indulgent laughs runs Wednesday, July 18 through to Saturday, July 21, with 5 additional performances on Tuesday July 24, Wednesday July 25, Thursday July 26, Friday July 27, and Saturday July 28, at 9:30 pm, at MTELUS.

Be prepared for more premium lineups to be announced in the coming weeks.

Find us on social media #JFLMTL

For tickets to the Montreal festival:

About Just For Laughs

Founded in 1983, the Just For Laughs Group’s growth is concentrated on three major focal points: festivals (in Montreal, Toronto, Vancouver and Sydney); television production and stand-up specials (most notably Gags, seen in 135 countries and on 100 airlines); and live shows (Canadian tour dates for Jerry Seinfeld, Jim Gaffigan, Bill Burr, Kevin Hart, Jimmy Carr, Danny Bhoy, North American dates for John Cleese & Eric Idle and Family Guy Live! to name a few). The Montreal Just For Laughs Festival, which will celebrate its 36th edition in 2018, is the world’s largest and most prestigious comedy event, welcoming more than 2 million people each summer.